Place Vendôme, among the most beautiful squares in the world

Place Vendome, built starting in 1685, under Louis XIV, is a collection of 28 individual hotels, most listed as historical monuments. A masterpiece of architecture and considered the most luxurious in the world, Place Vendome is Paris's site of fine French and international jewelry. 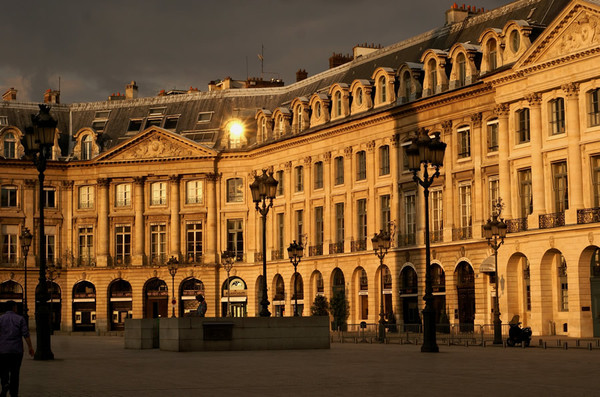 Place Vendome could be compared to the Place des Vosges Two royal squares, one built under Henry IV, the other under the Sun King, perfectly symmetrical, both in the layout of the buildings and in each building's design. Perhaps less charming than the Place des Vosges, which does not have a garden, Place Vendome is like Versailles; the expression of France's wealth and influence under Louis XIV.

The architect Mansart, who designed the octagonal square's plans, was King Louis XIV's first architect. He realized many parts of the Palace of Versailles, the Hall of Mirrors, Church of Notre Dame, Versailles, the Royal chapel, the Grand Trianon...If you are sensitive to 17th century French architecture and you are considering visiting the Palace of Versailles, this visit will be an interesting preview for you. The architecture of Châteauneuf de Meudon by Mansart, recaptures the same principles as those of the buildings in Place Vendome.

Among the famous hotels include The Bourvallais hotel, which is the Ministry of Justice's headquarters, The Gramont hotel, home to part of The Ritz Hotel or The Baudard hotel in St. James where Frederick Chopin rented an apartment between 1849 and 1853.

You will find no less than 28 prestigious jewelers, whose full contact details and web addresses given at the end of the article.
The first jeweler to move into Vendome is Boucheron in 1893. He is followed by Cartier in 1898, Chaumet in 1902, Van Cleef & Arpels in 1906 ...
Chanel opened her boutique devoted to watches and jewelry in 1997. Gabrielle Chanel loved Place Vendome, where she lived for many years. Legend says that the place's shape inspired him for that of the famous Numéro 5 bottle.

Among the anecdotes about the jewelers of Place Vendôme include that of the Maharaja of Patiala. The Maharajah, had returned to Boucheron in 1923 with twelve guards carrying six trunks full of emeralds, forming the most valuable jewelry convoy ever seen in Paris. They came, opened the trunks and The Maharajah placed the largest order in Place Vendome's history.

During the same visit, Cartier receives the Maharajah and creates a spectacular diamond necklace.


The column in Place Vendome

The statue of Louis XIV, was housed in the square's center, which was destroyed during the revolution in August 1789. A column topped with a statue of Napoleon 1st in Caesar is installed in 1810 to commemorate the victory of Austerlitz. The statue was replaced in 1830 by that of the same emperor with the "little corporal" and again replaced by a copy of Napoleon's 1st statue. The column was reversed in 1871 by the Communards then re-installed 1873.